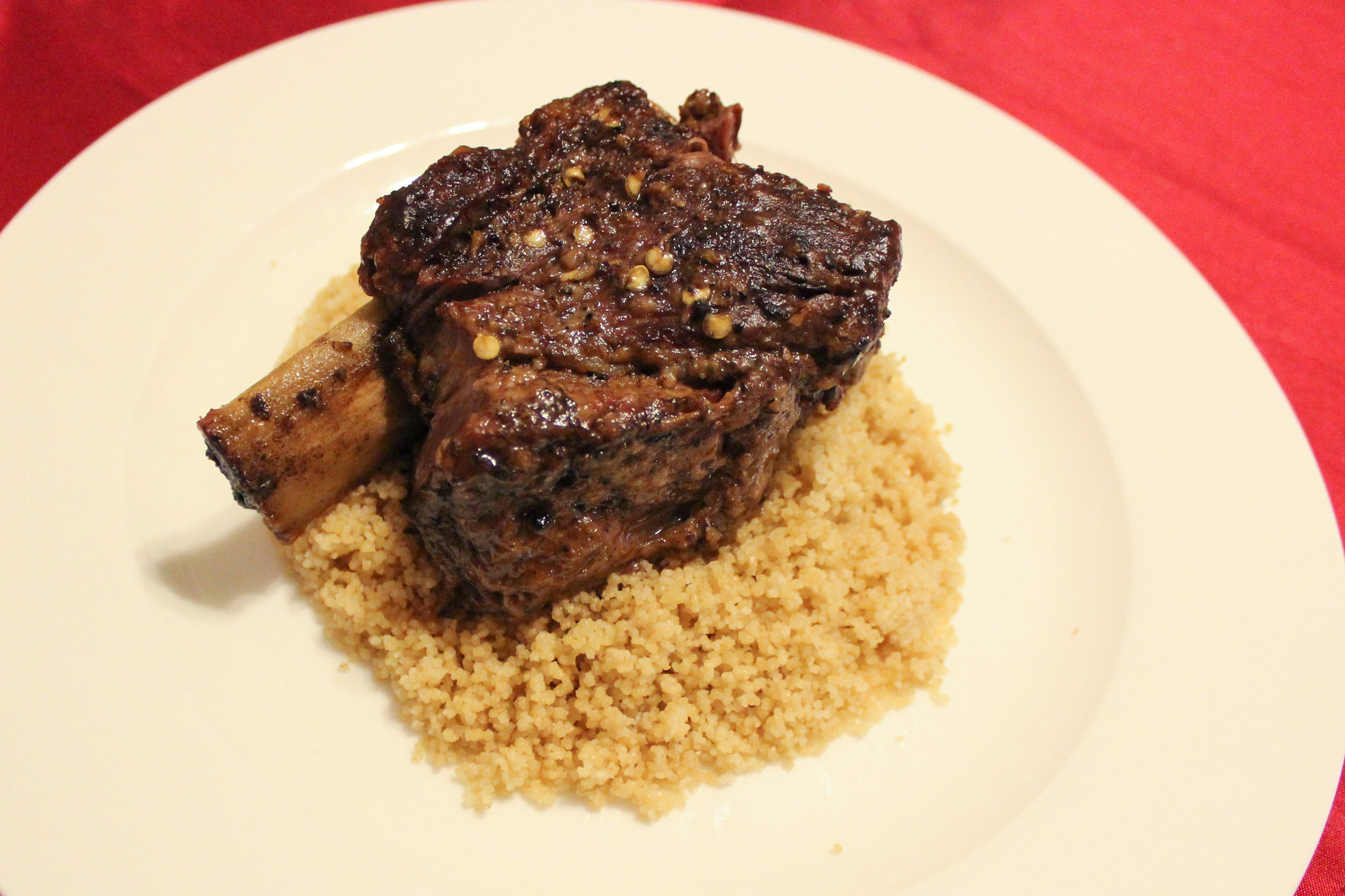 For this short rib recipe, jalapeño, onion, garlic, beer, and rosemary all come together to make a savory and slightly spicy braise. I love that the liquid imparts a lot of flavor on the short ribs in the long cooking process.

I should probably mention that you should plan on getting started on this about 3 hours before you would like to eat dinner. It takes about 1/2 an hour to prep and sear the meat and then it cooks in the oven for 2 to 2 1/2 hours. It is so worth all that time in the oven though. The meat becomes very tender and pulls completely away from the bone.

The beef short ribs taste great with rice, couscous, or another grain and any hearty winter vegetable. In the photo above, you can see that I served it with whole wheat couscous. I plan on stir frying bell peppers soon and serving that with the meat and tortillas. I imagine this would be great for a party, but if you’re serving a group and want to cut costs you might want to use chuck roast instead. 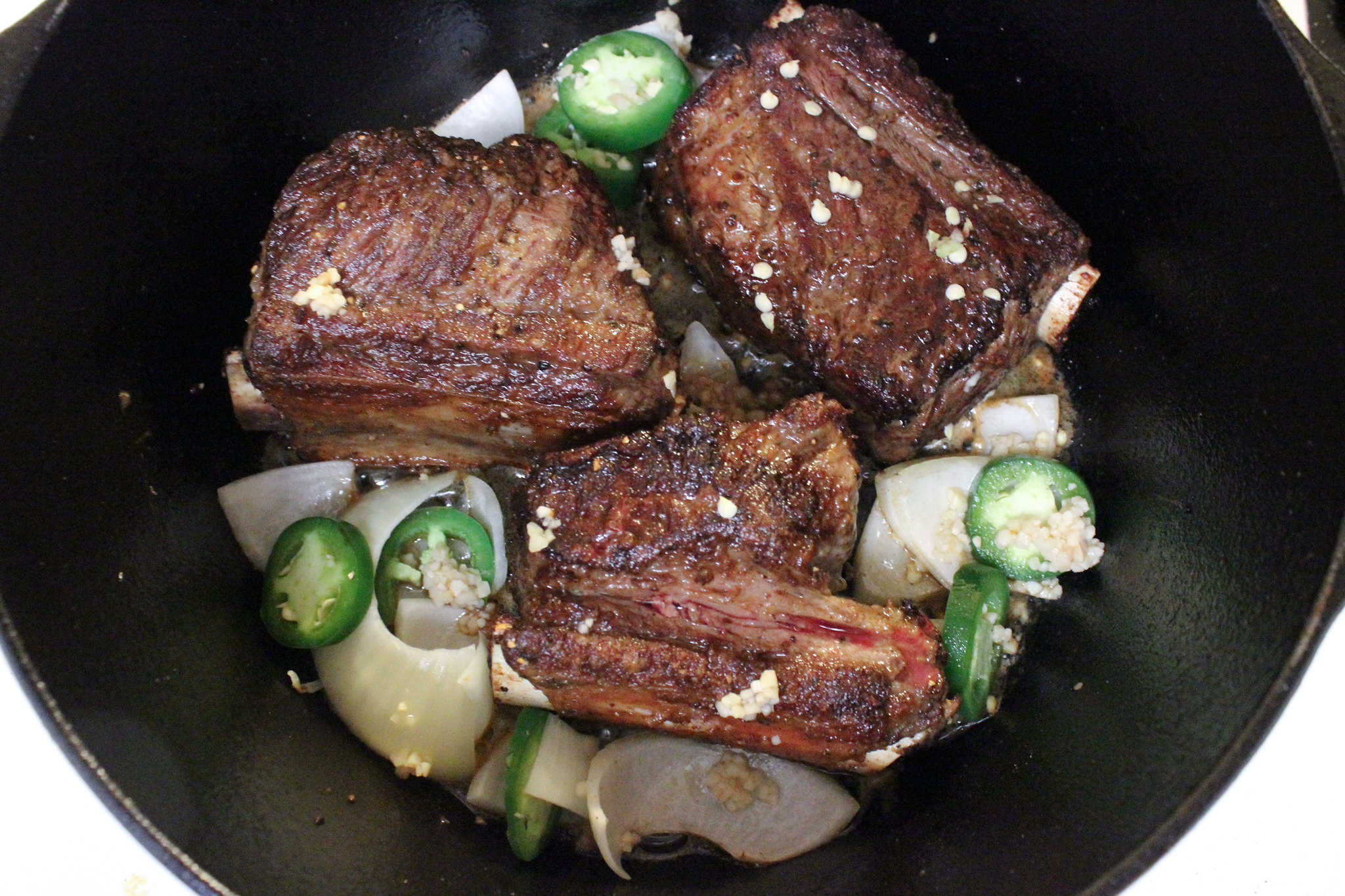 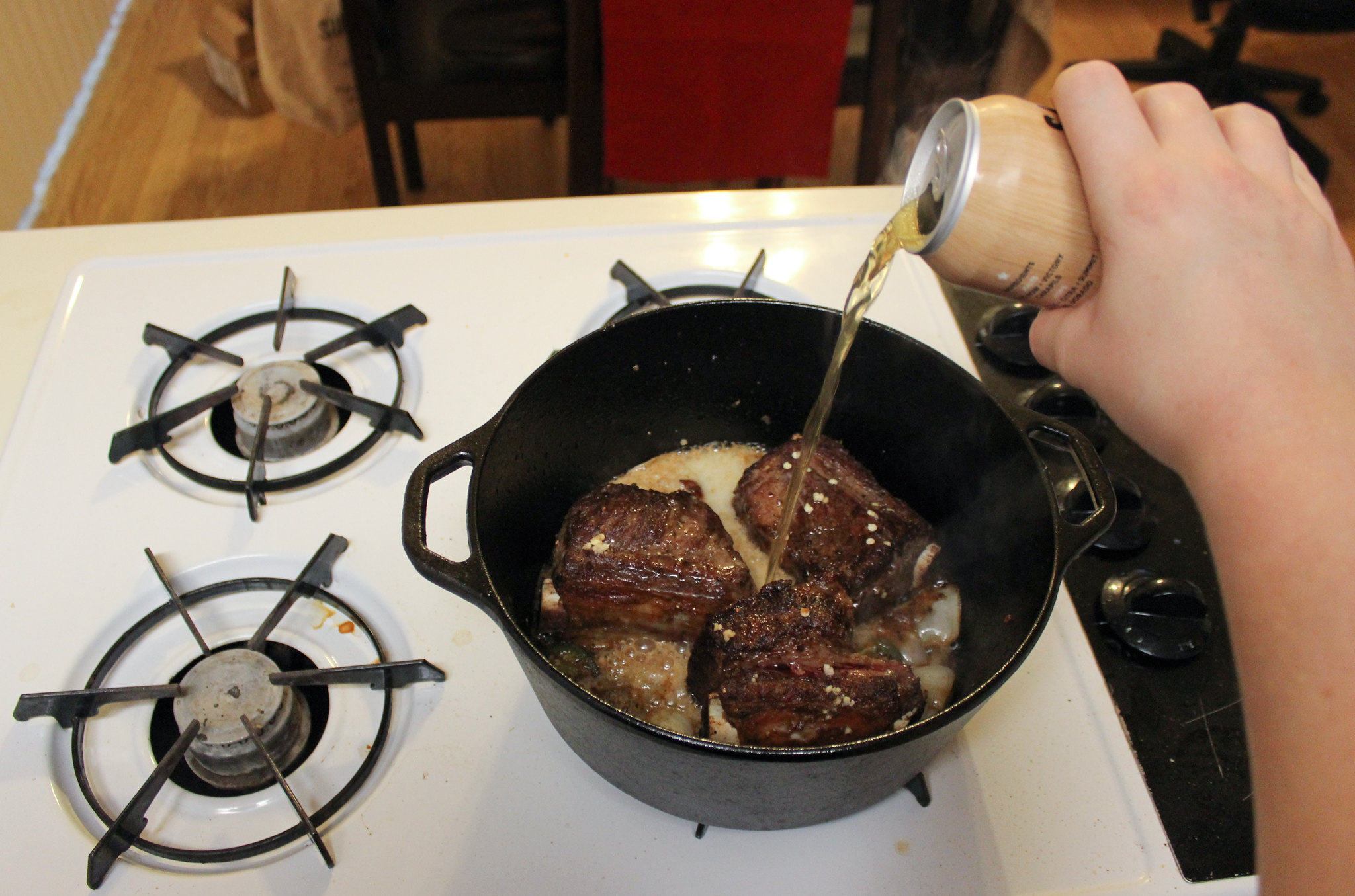 I had this recipe in the notes app on my phone from October 29, 2016. It was labeled as beef stew. I remember making this beef stew and it being good, so I decided to try it again.

The recipe in the note wasn’t what you will read down below, though. It wasn’t as complete and didn’t quite make sense, so I had to re-write it and test it out twice. I’m fairly certain I didn’t have a dutch oven back in 2016, so I’m not even quite sure how I made this. I must have just used my large oven-safe stock pot and put that in the oven.

When I made this last month, the first time I tested the updated recipe, I used a package labeled beef back ribs by accident. I’m not entirely sure what the difference is between back ribs and short ribs, except the back ribs were definitely longer and it seemed as if they were less fatty. The beef still tasted great and the meat was less expensive than short ribs.

Short ribs used to be inexpensive but they have become such a popular cut that they increased in price. The good thing about short ribs is that they’re not as long so they fit easier in the dutch oven. I had to cook the back ribs in batches. 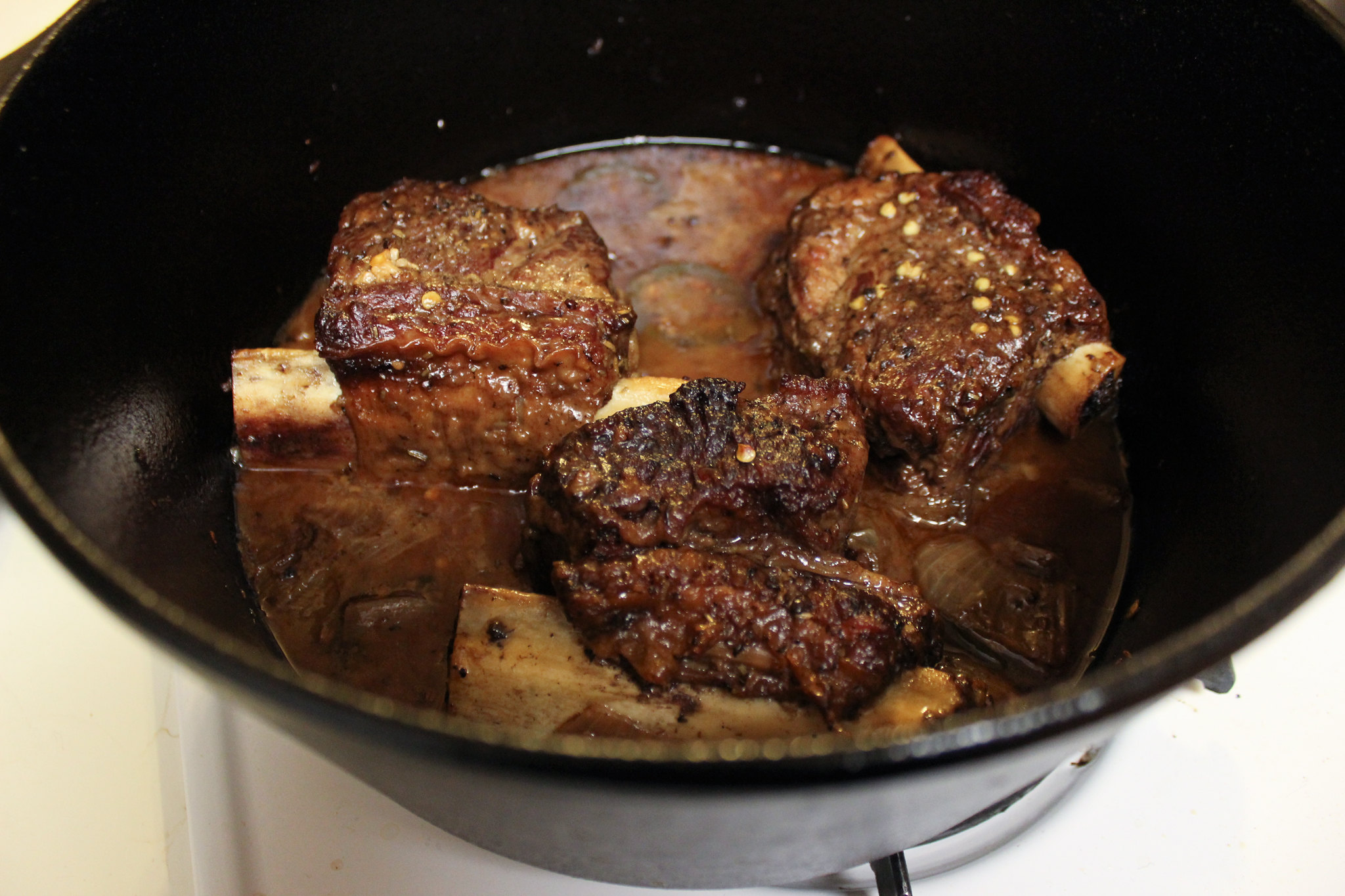 Adapted from The Kitchn with inspiration from the pioneer woman.

Arrange a rack in the lower third of the oven, remove the racks above it, and heat to 325°F. Brush each short rib with the oil, then sprinkle generously with flour, salt and pepper.

On medium high heat, sear the beef on all sides for several minutes each. This should take about 15 minutes. Don’t crowd the pan. If the meat doesn’t all fit in the pan, cook in batches. Sear the ends as well as the sides.

Turn the heat down to medium and add the jalapeño, onion and garlic around the browned short ribs. Let the onions cook until they soften, about 5 minutes.

Add the beer and water to the pot and bring to a simmer.

After the liquid comes to a simmer, add the rosemary. Cover and place in the oven. Braise in the oven until the meat is very tender and pulling away from the bone, 2 to 2 1/2 hours.

Notes:
Add more onion if you want. As you may know, my husband is picky about onions.

Use your favorite beer. In my case, an IPA beer every time but a different one each time. I don’t recommend using a beer that has a strong fruit flavor, even if you like that normally. It could conflict with the jalapeño and other flavors too much.

The liquid should thicken and cook down. Check on it halfway through cooking and add additional liquid if necessary. There should be no less than 1/4 of an inch of liquid.